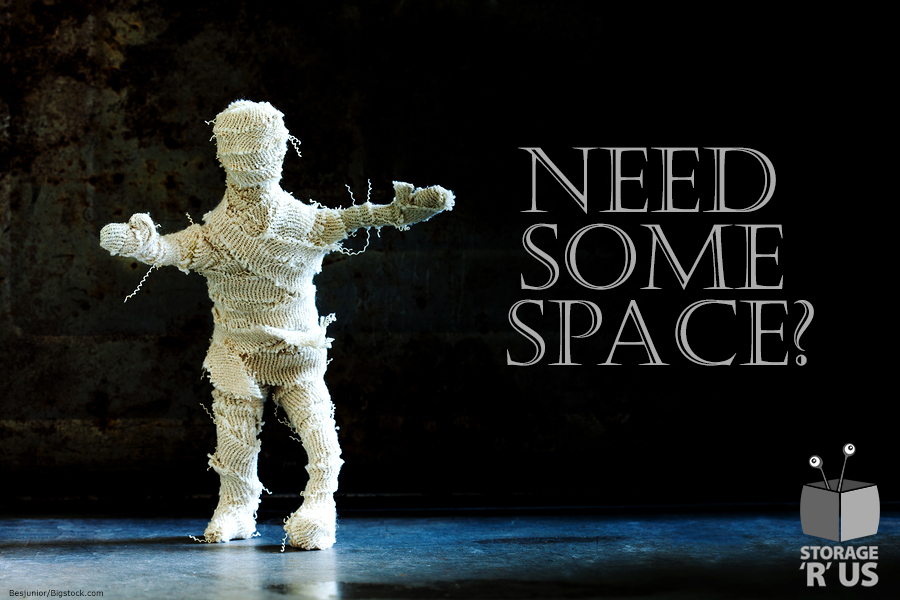 How Famous Movie Monsters Would Use Self Storage!

Here at Storage ‘R’ Us, we’re serious about self storage, but we also like to have a little fun, especially around the holidays. This year, we’re getting into the Halloween spirit and pondering what some famous film monsters might have kept in self storage if it had been available to them.

Sure, Oklahoma has its fair share of spooks, critters, and urban legends, including Bigfoot sightings and our very own giant octopus, but unfortunately (or maybe we should say fortunately) none of the famous movie monsters of yore have ever made Oklahoma their home (that we know of), so we can only speculate. Still, we like to think that if they did make it out to our neck of the woods, they’d find self storage pretty useful.

Count Dracula – Dracula seems like a very private type of guy and also someone who needs a lot of storage space. If nothing else, he needs a secure location to keep his coffin filled with his native Transylvanian soil. Even for a strong guy like the Count, getting a coffin full of dirt into a self storage unit isn’t going to be easy, so he might prefer drive-up self storage to the climate controlled variety. Since he can only come and go at night, he’ll appreciate 24/7 gate access.

Frankenstein’s Monster – He may just be misunderstood, but Frankenstein’s monster is still a bit of a loner. A real minimalist, he probably doesn’t have a lot of possessions. While he might want to use climate controlled self storage for some spare parts, storage facilities frown on that sort of thing. He does probably go through a lot of those big boots of his, clomping around the countryside all night, so he might need a place to keep a few extra pairs.

The Wolfman – By day, the Wolfman is a fairly refined gentleman, but under the full moon things are quite different. We figure he must go through an awful lot of suits, transforming like that, and he’d probably like convenient 24/7 access to climate controlled self storage for a change of clothes the morning after an episode. He might also want to use his secure self storage unit to lock himself up before the change, but we have to remind everyone that it’s illegal (and dangerous) to use a self storage unit to lock up people or pets—even lycanthropes—no matter how poorly behaved they may be!

The Mummy – Imhotep was an ancient Egyptian prince, so he probably has a lot of treasure, statues, gold jewelry and trinkets, canopic jars, chairs, paintings, and scrolls—so many scrolls. With all that ancient stuff, he’ll need a lot of space, and climate controlled self storage is an absolute must!

The Invisible Man – The quintessential mad scientist, the Invisible Man has a whole lot of scientific equipment and books that he needs to access at all hours of the day and night, and he also needs a place to store a spare change of clothes and some bandages for when he gets back from his nefarious deeds! He also deals in a lot of weird formulas, too, but he’ll have to store those somewhere else: You’re not allowed to keep dangerous chemicals in your self storage unit, no matter how earth-shattering your experiments may be!

The Hunchback of Notre Dame – Quasimodo, the deformed bell ringer of Notre Dame Cathedral, may need to store anything from a collection of handbells to practice with when he’s not ringing the big cathedral bells to a bunch of T-shirts that don’t fit anyone but him. Though he spends a lot of time alone, he’s also something of a romantic, so he may also have a large collection of romance novels and romcom DVDs, not to mention a few gargoyles that would take up a lot of space in the average apartment.

The Phantom of the Opera – Cultured, talented, and maybe a little homicidal, the Phantom keeps a whole lot of stuff in his secret lair beneath the Opera House. If he decided to relocate, he’d probably need someplace to put everything from sheet music and costumes to musical instruments and theatrical rigging. All of that would require plenty of climate controlled self storage.

The Creature from the Black Lagoon – He makes his home on the Amazon river and may date back millions of years, all the way to the Devonian Age! A guy like that might not seem like he would need a lot of room, but who knows? If the Creature ever gets tired of swimming around and decides to buy a boat like the ones that keep capturing him, he’d need to keep it in boat and vehicle storage during the off season.

Ghosts – Ghosts usually haunt houses, and they probably don’t have a lot of use for self storage, unless they need a place to keep spare sheets and rattling chains when they’re not actively haunting. But sometimes ghosts possess objects, like that creepy Annabelle doll, and when that happens, they might want a nice, safe place to keep that object during their time off. Climate controlled self storage may be just the ticket for possessed dolls, haunted mirrors, and cursed paintings.

The Headless Horseman – We don’t know why, but we just feel like the Headless Horseman probably likes hats. Ironic, right? He may have a big collection of hats that he can’t wait to wear once he gets his head back on. Until that happens, he can find a safe and convenient home for them at Storage ‘R’ Us. Unfortunately, we can’t stable his horse for him. If he wanted to trade in his faithful steed for a motorcycle, however, vehicle storage would be perfect for that!

Your self storage needs may not be as specific as all of these monsters’ needs, but that doesn’t mean they’re any less important. From climate controlled self storage to specialty vehicle storage, Storage ‘R’Us has the storage options you need. We’re happy to help you find the storage solution that’s perfect for you. With 24/7 access, we can work with your schedule, even if it’s nocturnal!