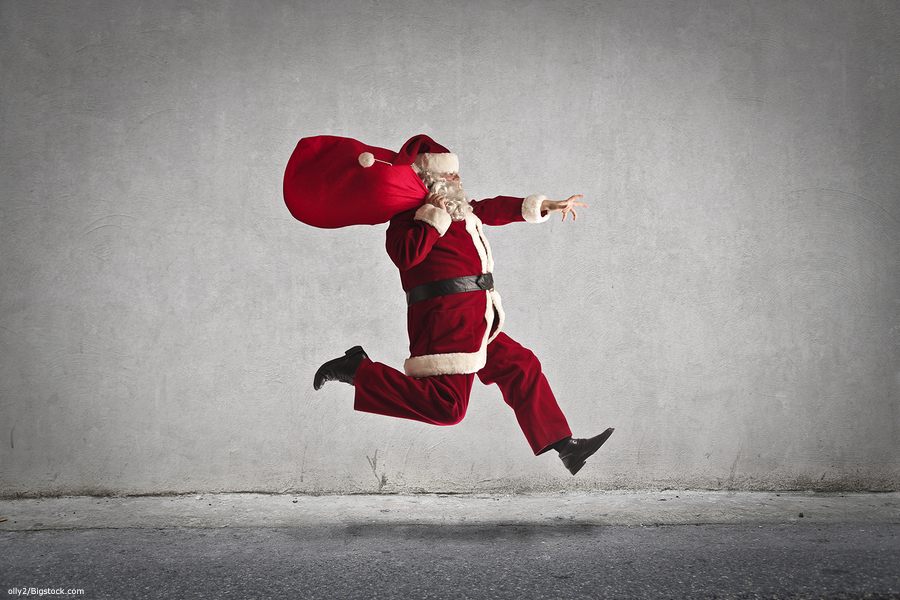 Santa Claus is coming to town… but he might not be able to hang around for very long. Santa has a lot to do on Christmas Eve. After all, one can’t deliver toys to all of the good little boys and girls all over the world in just one night if he spends too much time dawdling—even with the help of magical, flying reindeer.

According to research conducted by Linda Harden, Santa has to bring toys to anywhere from 378 million to 2 billion children around the world. Even at the low end of that figure, that’s roughly 91.8 million homes to visit. Fortunately for Santa, he’s actually got about 31 hours of Christmas Eve to work with, accounting for different time zones and the rotation of the earth. This is, of course, assuming he wisely opts to travel from east to west. And Santa’s been doing this for a while, so you can bet he’s figured out the best way to get the job done.

Even so, in order to hit all of the houses, Santa would have to make roughly 822 visits every second, which means that his sleigh would have to be moving at around 650 miles per second, or 3000 times the speed of sound. (You’d think this would create sonic booms or other disturbances, but Santa probably gets around that thanks to those aforementioned magic reindeer.)

But that’s not all! Even if every kid only received one present the size of a medium Lego set, Santa’s sleigh would still have to carry over 300,000 tons of toys alone, not counting the weight of the sleigh itself, or that of Santa, who we all know isn’t exactly slim. That’s a lot of strain to put on just eight or nine reindeer—even flying ones! And Santa’s a nice guy who wouldn’t want to overload his reindeer, so we figure he must have some of those toys stockpiled around the globe so that he can make strategic stops to pick up new gifts every few hundred miles or so.

And what better place to store excess presents than in a self-storage facility like Storage ‘R’ Us? After all, self-storage offers variously sized units to fit your needs—whether they’re modest or Santa-sized—and the Oklahoma self-storage units at Storage ‘R’ Us are accessible 24/7, 365 days a year. For Santa, this means he can stop in whenever he passes by on his whirlwind journey and stock back up on presents before he’s off to the next house!

So does Santa Claus really stockpile Christmas gifts at Storage ‘R’ Us? Well, given our six (soon to be eight!) convenient self-storage locations across southern Oklahoma, there’s no reason why he shouldn’t… but we’ll never tell! If you need a place to store your Christmas gifts, festive decorations, or anything else this holiday season, visit Storage ‘R’ Us today!

Merry Christmas and Happy Holidays from all at Storage ‘R’ Us!