Storage ‘R’ Us in Oklahoma is a Certified Patriotic Employer 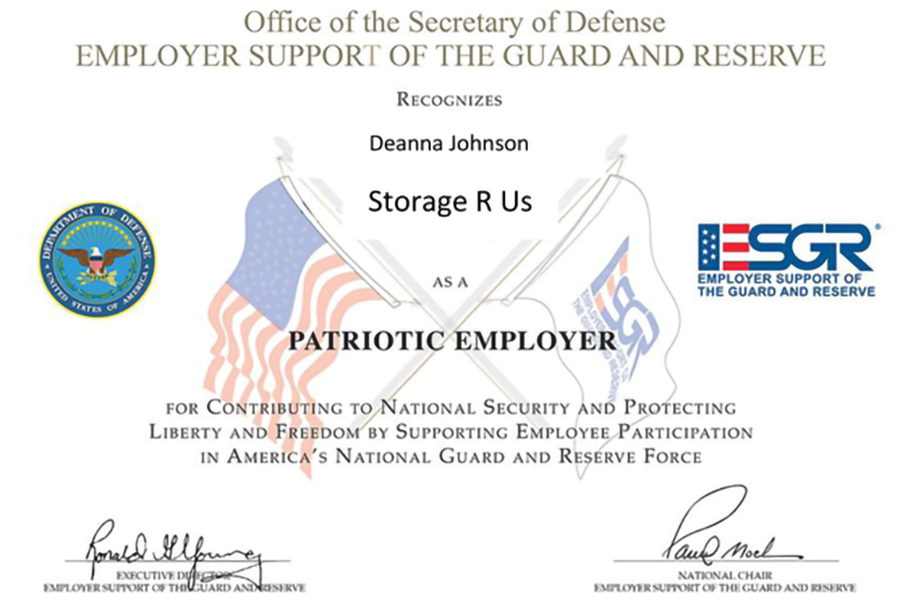 Storage ‘R’ Us in Oklahoma is a Certified Patriotic Employer

You may have already seen the “Newsflash” on the home page of the Storage ‘R’ Us site that mentions how we’ve been honored by Office of the Secretary of Defense. Folks who know us also know that we’re proud supporters of the U.S. Military. And, we believe that , as an employer, we have a duty to preserve an employment position for any of our staff members who enlist in the Guard or Reserve to serve our country. In other words, we’ll do our best to keep your job open while you’re doing your best to protect American citizens and the American way of life wherever you’re stationed. And although we don’t have this policy in place so that we can get certificates of recognition, we still think it’s pretty cool that we have a certificate to hang on the wall now.

Although many may know the Department of Defense (DOD) by name, some may not know the ESGR and what they represent. The ESGR is an office of the DOD that was established in 1972 to promote solid relationships between Reserve members and their civilian employers. During the Vietnam era, there were, unfortunately, a great number of conflicts between Americans with military commitments and their employers back home in the States. Today, thanks to the ESGR and its network of nearly 5,000 volunteers across the U.S., there is a promise of meaningful employment when members of the Guard and Reserve return to civilian life. You can read more about the EGSR, their mission and strategy, by clicking here.

There have been a number of Storage ‘R’ Us employees who volunteered for various branches of the U.S. Military over the years, and we’ve honored them all in our own way. As a family-owned business with unique ties to the U.S. Military, we understand the bravery and sacrifice it takes to join up and serve the interests of the Nation. As stated earlier, we are proud to have a Patriotic Employer certificate to hang on the wall here at Storage ‘R’ Us, but, more than that, we’re even more proud of our employees who felt the call to service and answered by joining the other brave men and women who protect our interests and our lives around the nation and across the globe.